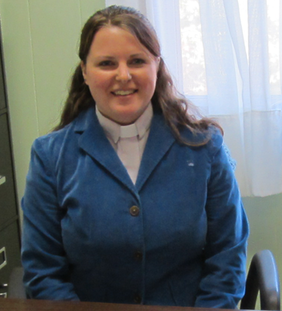 Pastor Hillary grew up in rural Southwest Wisconsin.  She attended Wartburg College and graduated from there in 2003 with a degree in Elementary Education.  During the summers, Pastor Hillary enjoyed being a camp counselor at Sugar Creek Bible Camp in Wisconsin.  It was through her experiences at camp that ultimate led her to decide to attend seminary.

After college and one more summer at camp, Pastor Hillary moved to Philadelphia, PA to take part in a year-long Christian volunteer program.  She spent her time in Philadelphia volunteering as a program aide in an after school program.

Pastor Hillary earned her Master’s of Divinity from Wartburg Seminary in 2009.  She received her first call in September of 2009.  On the 26th of September 2009, Pastor Hillary was ordained at her home congregation, St. John Lutheran Church, in Richland Center, WI.  Pastor Hillary, John and Taggart moved to Garnavillo, IA in October 2009.

In June 2011, Pastor Hillary and John added another son, Benjamin Wayne, to their family.  Pastor Hillary, John, Taggart and Benjamin enjoy living in Northeast Iowa where they are close to the Mississippi River and to Pastor Hillary’s family in Wisconsin.